Would you like new stories for sims and want them to be more autonomous in their lives, without having to control them? Got married to see that sims in your town keep doing the same things, never progressing in their careers or chasing goals and dying of old age, filling your town with ghosts and no cool new sim out there, except you go there yourself and build some? So good news.

This will be possible with the next game update, “Neighborhood Stories” which will allow you to give a “little push” into the lives of neighborhood sims, without necessarily having to control them. It's something that is now possible with the MCCC mod, but not as much refinement as the mod allows, but it's something much more advanced than what the base game has for them today.

Read more:
What is MC Command Center
Tricks and Commands for Getting Married in The Sims
Discover the Trash to Luxury Challenge Rules
Meet the 100 babies challenge
Read our The Sims 4 Review

Through your actions, you'll be able to serve as an advisor for important decisions in your sims' lives and push them in the direction you want. You can even plant the seeds of those decisions in their heads, just like in the beginning. Scold one Sim in front of another, and their relationship will plummet. Push two Sims into a relationship with each other just because you can and watch a marriage happen. Separate a happy couple. Convince an unemployed Sim to get a job. You'll really be able to tinker with people's personal affairs.

This is somewhat similar to a feature in The Sims 3 called Story Progression, which allows NPC Sims to make decisions like moving, getting married, or having kids, thus making their neighborhood more dynamic and unpredictable. The difference here with Neighborhood Stories is that your neighbors will not have as much independence. If an NPC decides to make a decision in life, he will call his Sim and ask him what he should do before actually doing anything. You can say yes, no or let them decide for themselves.

It appears that EA is acting very cautiously around this update, probably not wanting to completely disrupt the players' neighborhood, with all the townies in the neighborhood having the ability to do their own thing. This is an attempt to make the rest of the neighborhood more dynamic, but not so dynamic that you're still not in control of everyone.

And your meddling may not always be successful, as it will depend on how strong your relationship is with the characters you're trying to manipulate, and how each character feels about what you're trying to push them. For example, if a character hates kids, you probably won't be able to convince them to have ten kids just to be funny. And if you suggest to Bob Pancakes that he should drop Eliza, and he really don't either, it might just make him mad at you.

Neighborhood Stories will also come with two new ambitions. One is called "Villainous Valentine" and will reward players for "destroying love life, both their own and other Sims' love lives." The Neighborhood Confidant is for those who want to exert a more positive influence on others. You can read more about The Sims 4 Neighborhood stories at official website.

New Appearances and New Stories for the Sims

EA gave Simmers their first glimpse of main character updates in The Sims 4. The studio originally announced in August that it would give certain "main characters" a visual update along with changes in tradition and their personalities. In a live stream this week featuring the new Kit feature and Neighborhood Stories, the team took a look at how progress on some revised NPCs is going.

SimGuruRusskii showed comparison photos for Laura and Vladimir Caixão, Dina Caliente and Nina Caliente. Laura and Vladimir have had their features altered to make them look older, which makes sense considering they currently don't look much older than their teenage daughter, Cassandra. Vladimir also seems to have a new mustache, which SimGuruRusskii said should look "a little more refined, a little more elegant". The team is considering adjusting his skin tone.

Laura's new concept also shows her with a tweaked skin tone, more closely reflecting her appearance in previous Sims games. They are planning a new hairstyle too, which will be “a little more modern, a little more refined too”.

The Caliente sisters are also getting tweaked skin tones, with SimGuruRusskii saying how the two "should be something of a concept between Spanish and Middle Eastern Arabic." The new concept brings the two closer to their appearances in older games, with the team finally intending to get rid of Dina's banana-yellow hair in exchange for something more discreet. Nina also seems to have changed her hair color a little to a more auburn shade. Both sisters are also expected to receive new outfits, making them look more “glamorous” compared to their outfit from the original 2014 release.

SimGuruRusskii says that there is still no planned release date for these changes and that everything is still a work in progress. She warned that the concepts are still subject to change.

Take Your Sims With You Anywhere 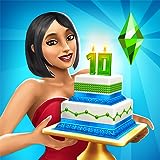 Express your creativity by customizing your Sims with distinctive looks and unique personalities, give them traits, and have fun with clothes and hairstyles. Easily build the perfect home for your Sims by choosing their favorite designs and decors, with more detail than ever on mobile platforms.

Experience the fun and exciting times in your Sims' lives as they reach career goals, pursue hobbies, develop relationships and improve their Lifestyle. Party with friends, socialize around town, visit special events, and give your favorite Sims Stickers. What stories will you tell?

Now leave it there in the comments, did you like the changes? Do you already have an idea of ​​what to do with the sims in your city? I personally didn't like this “attempt at realism” in the sims skin. Take the opportunity to read more about The Sims on our website.