PC inside a Notebook? Meet 2 AM Gamers Notebooks

Processor of a PC Gamer inside a notebook that can be upgraded? It's Possible With 2 AM Gamers Notebooks

When we think about buying a gamer PC we always think about the best settings we can for our budget. In addition to the processor, video card, monitor, sound and peripherals such as the keyboard or mouse and we end up seeing that it is not always possible to have everything we want or, alternatively, we can choose a gaming notebook and have everything in one package , but, sacrificing some of the power.

It comes as no surprise to anyone that gaming notebooks have generally slightly inferior hardware than a gaming desktop. This is due to space, economy, limited battery and other factors that prevent a notebook from achieving the same performance as a PC, and we've even made a whole guide to help you choose the best one processor it's the best video card for your gaming notebook. However, you may no longer need to make that choice.

Let's talk a little bit about 2 AM's Gamer Notebooks which have an edge over regular gaming notebooks. Marcos Wendler, manager of 2 AM, can comment on the usability and advantages of using this type of machine.

Generally, gaming notebooks have different processors than desktop computers, in many cases these processors have less power, as the parts need to be within the power and size limitations of the machine. The E550 from 2 AM, however, escapes this normality and offers the same processor as a desktop.

The advantages of using a desktop chip is high performance for different activities, from modern games to heavier video programs. In other words, the notebook fits the user's needs.Marcos Wendler, 2 AM Manager

In addition to the limited capabilities of a traditional gaming notebook, gamers who choose this computer model to be their gaming system face another problem: the inability to upgrade the system, limiting its initial configuration. Apparently, 2 AM, a brand of the company Positivo Informática, solved these two problems by placing a desktop processor inside its gaming notebook. Something we only see on premium gaming notebooks like the Alienware Area-51M.

The gaming notebook 2 AM E550 comes equipped with Intel's ninth-generation Core i5 or Core i7 processors, designed for the desktop, which translates to better performance – and, at the same time, higher battery consumption. The dedicated graphics card is an Nvidia GeForce GTX 1050 with 3GB GDDR5 memory. Speaking of RAM memory, it has options of 8 or 16 GB DDR4 2666. A package that doesn't owe anyone in terms of power and graphics capability for heavier AAA games, streaming or for video editing software.

In terms of hard drive, 2 AM gaming notebooks still have 256GB M.2 NVMe SSD hard drives and a 1 TB hard drive. According to 2 AM the read speed on these components with this standard is up to 3,9 times faster than on SATA SSDs – and 16 times compared to traditional HDs. Another interesting detail is that it is still possible to upgrade HD, including another SSD as needed. It really is a gaming notebook made to stay relevant for a long time, without needing to be replaced.

The model's battery has a capacity of 47 Wh (Watts-hour) and six cells, which guarantees an autonomy of up to four hours of conventional domestic use, and by that I mean internet browsing, office work and others activities that do not make use of all the processing and graphics power of the notebook. Playing games, it's possible that you have about an hour of battery life there, so the best thing is to use it connected to the wall socket.

Speaking of autonomy, the screen of the 2 AM E550 is a 15,6-inch Full HD monitor (1920×1080) with IPS technology, which guarantees you a good image for your games without chokes and with a good response, however, if If you want something more, you can connect up to two monitors to it, via its HDMI input and two DisplayPort ports, turning the notebook into an effective desktop while you're at home or at work.

The keyboard comes with RBG lighting and can be configured through an app to shine with whatever colors you want, in addition to being able to divide this lighting into sections and put different colors to light it. And in the sound part, it fulfills its functions well and even has a headphone jack, in case you want something more enhanced.

Speaking of noise, how can a notebook guarantee good performance with a desktop processor without “frying” or making a fan noise? In fact, the E550's fan is quite powerful and the notebook's cooling system is done through two individual copper tubes. The processor tube does not connect to the video card tube, allowing each to have its own cooling system. In addition, each has an individual fan that can be configured to run according to your need for cooling and noise.

See the technical specifications of the 2 AM E550 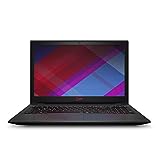 The 550 AM E2 can be found for approximately R$ 5.393,07 at official website. Now, comment what you think of the notebook? Contact us and take the opportunity to read more about tech on our website.